OK
Delete ?
Warning: Adult Content
The content you were about to view is not suitable for minors.
The page that you are trying to access contains adult content, which may not be suited for minors. Please verify that you are aware of this, and are within legal age limit to access this content. Note that we take no responsibility for any content if you decide to proceed to this page as a minor.
Leave this page
I am an adult, continue
Hogwarts: History of Magic
Like
Drag & Drop

No renderings uploaded yet
43
4
About
Inventory
Share
The only surprise in History of Magic had occurred their first day of class when Professor Cuthbert Binns had drifted into the room via the blackboard. The ghost had passed in his sleep one day last century and neglected to notice that fact. Instead he'd returned to work the next day and every day since, and nothing but nothing has changed in his classroom in that time except for the number of cobwebs.

Maybe it's because he hasn't a physical body, or perhaps it's because spirits can't perform spells of their own, but there's a noted lack of heat and light in the room. Draco's father has heard about it of course, but all his complaints have accomplished is for the elves to keep bringing more and more candles no one actually lights. Vince eventually grows frustrated and ignites the lot - he's always had a bit of a thing for fire - but the flames soon get out of control. Blaise's Augamenti easily puts things to rights, and if Vince gets drenched in the process? He probably deserves it.

Play features: Help the candles magically appear (even house elves can use a helping hand). Cast the Incendio for Vince to light the gloomy room. Perform the Augamenti for Blaise that rescues the ancient desks from the flames. Or just help Draco swot so he'll finally get better marks than Hermione... 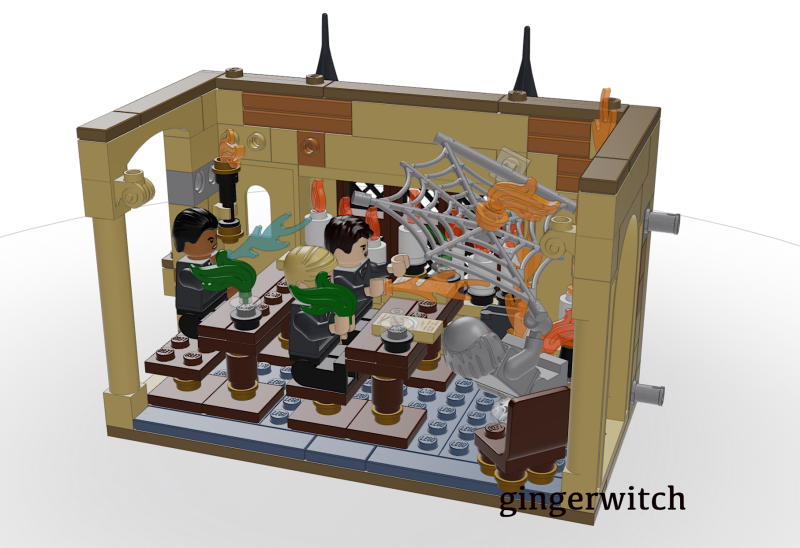 
A set for budding pyromaniacs that would (should?) never be produced... Shown with both the Hogwarts Mystery and the Lego: Harry Potter Years 1-4 versions of Professor Binns. (Or as close as the MB parts database let me get...)