OK
Delete ?
Warning: Adult Content
The content you were about to view is not suitable for minors.
The page that you are trying to access contains adult content, which may not be suited for minors. Please verify that you are aware of this, and are within legal age limit to access this content. Note that we take no responsibility for any content if you decide to proceed to this page as a minor.
Leave this page
I am an adult, continue
The Cave: Challenge For The Horcrux
Like
Drag & Drop

No renderings uploaded yet
72
9
About
Inventory
Share
A custom Harry Potter set I made of the scene in Half-Blood Prince which takes place in Voldemort’s spooky Horcrux cave!

I wish they’d make a set of this scene, maybe in the future. One could argue that this part is too dark to be turned into a children’s toy, but they’ve already made the Dementor’s attack and Voldemort’s resurrection, so this would probably be fine...

It features:
-The Boat Harry and Dumbledore take to get to the island (chain included)
-The “Lumos Maxima ball” which lights their way,
-The ring of fire, or “Firestorm” Dumbledore creates,
-The crystal island with the basin of torture potion which hides the Horcrux, a seashell for its drinking cup, and Slytherin’s Locket itself,
-And finally 4 Minifigures—Harry Potter, Albus Dumbledore with an injured hand, and two reanimated corpses, or Inferi (one Inferius with hair and one bald)

The model uses 100% legal connections and 0% clipping—at least I think so...

And of course, a render for you! Not the clearest one, but the movie scene’s lighting was very gloomy: 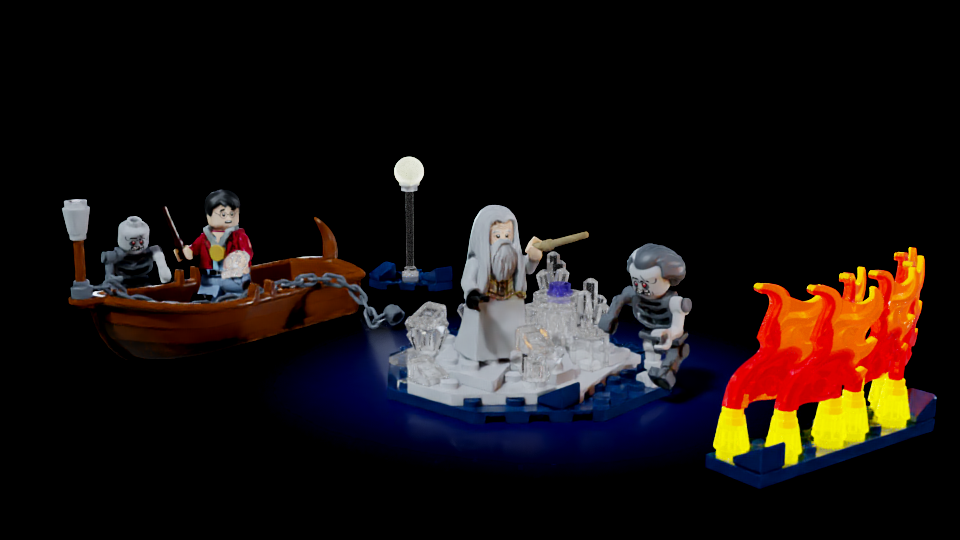 Suggestion, I don't know if the shell piece is on Mecabricks... but he uses a shell to give Dumbledore the potion, Just some ideas!
Cole08
@Slim It's called INFERI
SlimBrick1
that is for single plural is Inferius's or something like that!
SlimBrick1
oops... I forgot to do something, HARRY POTTER FREAK!!!
WizardBuilds1
That detail was definitely added, it’s in Harry’s hand, it’s just a little hard to see.
WizardBuilds1
Good, call, SlimBoy. You’ve gotta say the line!
SlimBrick1
I see it now! Great job remembering to put that!
SlimBrick1
you notice it more in the render
WizardBuilds1
Is anybody else excited for the Deathly Hallows sets to come out?
SlimBrick1
ME!!!
WizardBuilds1
I hope they make the Lovegoods’ house, the final duel, Malfoy Manor, the Ministry of Magic, the Hogwarts wood bridge, maybe another Forbidden Forest reebot, and the Hogwarts boat house with Snape and Nagini—all that good stuff.
Deathly Hallows was my favorite book, and two of my top movies, so I really hope they do a good job with the sets.
SlimBrick1
I think the final duel is a guarantee
WizardBuilds1
I just hope they find a cool way to make the spell...
WizardBuilds1
Priori Incantatum, I mean, of course!!
*shakes head at self*
You’ve got to do better, Wiz. If you don’t know these things off the top of your head, you’re not a true fan. Back to the studying process...
*consults Harry Potter books once more*
SlimBrick1
HARRY POTTER FREAK!!!
justyouraveragebuilder
I've heard of Priori Incantatum before... lemme use my big brainz
Priori Incantatum sounds like "prior incantations" so I think it's what happens in GoF when all the spirits come out, like Cedric, that one witch he killed, Harry's parents, and the groundskeeper.
-Rubrickscube-
This is based off of the movie I see . I love the scene!
-Rubrickscube-
I say based off the movie because there are a few big differences between your description (which matches the movie's) and the books.

AnD tHe LoCkEt WaS a FaKeEeEeE
-Rubrickscube-
but they did clarify in the movie that it was a fake as well.
LegoMaster707
cool
WizardBuilds1
Cube- Yes, all the Harry Potter sets are based off the movie.
It’d be hard to make a set based off of what a book tells us...
wizardkid2011
this is awesome
silverlighlning22
cool!
WizardBuilds1
Thanks, guys!
silverlighlning22
np
WizardBuilds1
NP to thank you, either.
SebastianButton.lego
I am a huge harry potter fan
-Rubrickscube-
oh you are right Wiz
-Rubrickscube-
Although the very first wave of lego harry potter sets around 20 years ago WAS based off the books. Idk how they did it xD
SebastianButton.lego
like the way you've done the inferi they give me the creeps
by WizardBuilds1
265 models | 8.8k views
Suggested Models
Modern Home for Cole08
by UnknownUser
04.0 - Faded Memories
by The_An0nym
Micro Vah Medoh
by Shipmaster