OK
Delete ?
Warning: Adult Content
The content you were about to view is not suitable for minors.
The page that you are trying to access contains adult content, which may not be suited for minors. Please verify that you are aware of this, and are within legal age limit to access this content. Note that we take no responsibility for any content if you decide to proceed to this page as a minor.
Leave this page
I am an adult, continue
Hot Takes Episode 1
Like
Drag & Drop

No renderings uploaded yet
53
2
About
Inventory
Share
Hey there!

Welcome to Hot Takes, the page where I talk about my thoughts and opinions on lego trains. Today I will be talking about set number 10194, "Emerald Night."

When I first started coming up with ideas for this series, one of the first questions I asked myself was:

"What is the most important train in lego's history?"

I asked my peers in the lego train community this question, and they gave me a bunch of ideas to consider. Some people said that some of the earliest train sets lego had to offer were important considering that they laid the groundwork for everything to follow. Others said that sets from the 9-volt era like the metroliner introduced arguably the most effective way to power your lego train, the 9-volt train motor. However, most of the community agreed that the Emerald Night is not only the most significant lego train in Lego's history but also redefined what a lego train could be.

For starters, the engine features many staples in design for almost all steam train mocs today. Most notable is the first use of the 85557 and 85558 large train wheels. I remember before these were introduced, lego train builders either could purchase custom wheels from a third-party company such as Big Ben Bricks (http://www.bigbenbricks.com/) or improvise by using wheels from sets from previous eras. Furthermore, this set was the first official steam engine to feature curved pieces (88930 specifically) in the boiler design instead of standard sloped bricks like on the 2006 Holiday Train (10173.) 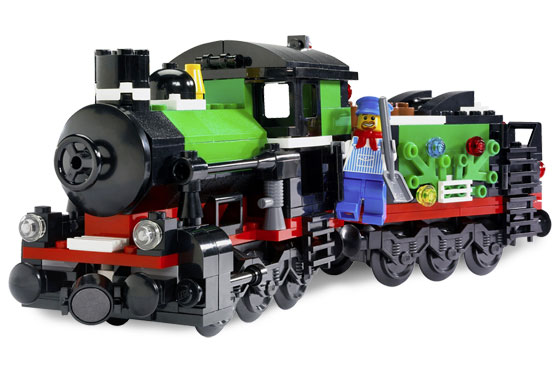 Here are some good examples of lego train mocs made before the Emerald Night (All credit goes to Stiegsfeld).
[youtube=JokNiBdH2Yo&list]
Suffice to say, the Emerald Night changed the way moc builders built their mocs of steam trains from there onward.
Looking at the train's design in retrospect, it still holds up. Even over a decade since its first release! Aside from some minor flaws based on the limitations at the time (mainly the drive wheels look too small, and some gaps in between the frame and the firebox expose the internal mechanism), the locomotive is still an excellent resemblance to the "Flying Scotsman." Although it isn't a "scale" replica like the 2018 crocodile locomotive (10277), it is still enough for train enthusiasts to recognize what the Emerald Night resembles while also being a stand-alone model to introduce newcomers to the hobby.
Overall, most of the lego train community, including myself, agree that the Emerald Night is arguably Lego's "magnum opus" regarding their train offerings. It not only redefined what Lego could produce but more so raised the potential for what the lego train community could build. Unfortunately, based on the recent sets featuring a steam train, such as the 2016 Holiday Train (10254) and the 2018 Hogwarts Express (75955), I would argue that the Emerald Night is perhaps the climax for lego steam train sets. Unless the rumored UCS Hogwarts Express convinces me otherwise, I doubt there will be a lego steam train as good as the Emerald Night for a long time.

Special thanks to Luke Triton for ideas and feedback.
https://www.youtube.com/user/ZombieNinja316
Emerald NightHot TakesLocomotiveTrain
Download model inventory: CSV | Bricklink XML
1159 pieces
Part
Image
Quantity
Name of the part
Direct Link
Embed Viewer
3 comments
Post comment
Login to comment
OffTheRoadGuy
Nice!! Wish I could have gotten a Emerald Night before it was discontinued.
Also, the Disney train actually looked super good
r2d2j2b2
Agreed, will definitely talk about it in a future episode
Mr_worriz
So true. The Emerald Night was ground breaking. Every year I wait for Lego to release a set like it
Also yeah, I would have been awesome to have gotten it
by r2d2j2b2
105 models | 16.0k views